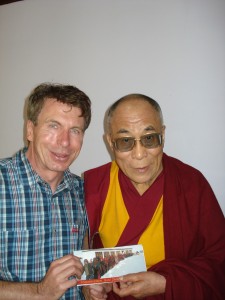 “When he was visiting Zanskar in 2009, only eight people were given the opportunity to meet him in person. Rainer Lezius who has been acting successfully as the representative of the Förderverein Sani Zanskar was granted an audience. His Holiness the Dalai Lama underlined the importance of aid organizations for safeguarding the traditional Tibetan heritage and culture. We are pursuing this objective as well. He acknowledged and blessed our activities, which greatly supports belief in our projects amongst the people.

Furthermore, he pointed out that he was hoping for believers and supporters not merely showing their devotion by prostration and saying “I do believe…”, worshiping a fetish or even him. This did not signify any true development, was much too simple and futile. He wished for people facing up to the Buddhist philosophy, its scripture and above all themselves.

Rainer Lezius: “I could truly understand this, on the one hand, on the other hand, however, I was carrying a bundle of strings with me which my friend Sonam had given to me to have them blessed. Some dilemma, a conflict of roles, what should I do? When saying farewell, I started stuttering and showed my bundle to the Dalai Lama who can also be quite strict at times. He started to laugh in his very own way and said – ok, ok, told me to come closer and breathed on the bundle – this was a truly relieving moment and an important lesson to learn. Take it easy, no matter what, those truly seeking the truth will find it – one way or the other :-) 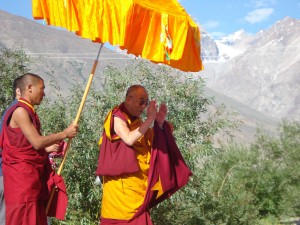