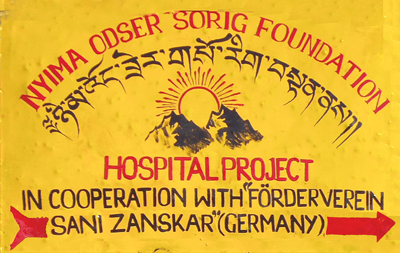 Our partner organization in Sani was given a piece of land by the local authorities in 2005 to erect a building there. During the winter semester in 2006 we were able to win the architectural faculty of the RWTH Aachen to offer a seminar for designing a multi-purpose house in Sani.

The prerequisites for such a house were as follows:

• the rooms should be heated exclusively with sun energy

The most noticeable aspect of the elaborated draft is the fully glazed southern part of the building. Seven students of architecture from Aachen travelled with us to Sani in 2007 and helped us to build this house. After a construction period amounting to only five months under the leadership of an internationally experienced site engineer in October 2007, the building was handed over to the inhabitants of Sani.

Thus, during Winter 2007/2008 the building could already be used as a winter school. This is the only winter school in the whole of Zanskar. Temperatures measured show that the rooms of the building are heated exclusively with sun energy. By registering these values, it is possible to plan future projects as well.