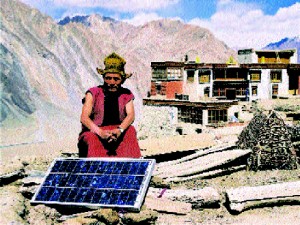 Rainer Lezius first contacted Auroville Renewable Energy (AURORE) in early 2006, after having seen the solar installation AURORE did at the Lamdon Model High School in Ufti, near Padum in Zanskar Valley.

AURORE is a non-profit solar solutions provider based in Auroville international township, close to Pondicherry in southern India and has been installing solar systems in Zanskar since 2003.

After the initial contact a slow but steady stream of emails started flowing between Auroville and Aachen. An estimate of the amount of energy the solar system had to provide was made and on the basis of that AURORE calculated the number of solar panels and batteries needed. A cost estimate was made, and in March 2008 the green light was given by Rainer to start preparing for the installation of the 1,050 Watt solar system in the summer of 2008.

It was still relatively quiet in Ladakh when the AURORE installation team headed up there in the second week of June. All materials were first shipped by train from South India to Delhi where everything was loaded on a jeep. There a 5-day journey started that took the team via Manali, Leh and Kargil to our end-destination Sani in Zanskar Valley.

This was the 5th consecutive year that AURORE was doing a solar installation in Zanskar and the route and surroundings were familiar. The journey went smoothly and the stunning beauty of the Himalayas keeps amazing, no matter how many times you’ve been there.

AURORE had contacted a local electrician in Padum several months before the arrival of the solar installation team. He had already completed all the internal wiring in the hospital/winter school building. It took only 1.5 days to install the solar panels on the roof and the maintenance-free battery bank and the inverter inside. The solar system was officially commissioned on June 12th.

The solar system is providing power to 20-odd lights, a computer, a data-logging system and a small pump which is used to lift water from a shallow well to irrigate the tree saplings planted in the compound.

The solar system was sized with future expansion in mind and designed to operate virtually maintenance-free. The only maintenance that needs to be done is to clean the panels regularly to make sure the maximum amount of sunrays can hit the solar cells and convert this free source of energy into useful electricity.