Solar Sani, building a solar winter school in the Himalayas

The aim behind the planning of a winter school in the northern village of Sani was the exclusive use of solar heating by means of very simple local mud-brick construction techniques. The general climatic conditions for this are characterized by extremes, i.e. the average temperature during the day over a period of more than six months is below the freezing point and drops in Winter as low as -20°. At the same time, solar radiation is very strong and reaches even in January still approximately 900 W/m². On the basis of comparative calculations of basic design variants, the most important wall structures were optimized with the help of simulations. These resulted in following simple passive solar strategies and the use of Trombe walls in different design variants, large-scale glazing and cavity clay walls.

After completion of the building, thermal development during Winter 2008/09 was recorded by means of ten measurement points in the house. Evaluation concentrates mainly on two periods, i.e. long and extremely cold periods during which outer temperatures fall as low as -30°C and do not exceed -20°C on average during the day. And periods with low solar radiation <50 Wm². In both situations the temperatures drop significantly and permanently below the freezing point in comparable traditional interiors. Inside the school it is possible to achieve a room temperature higher than the outside temperatures by 20-30°C. In summary, the series of measurements confirms the positive response given by users, i.e. on 350 days out of 365 days of the year it is possible to realize adequate temperatures exclusively with simple passive solar designs. 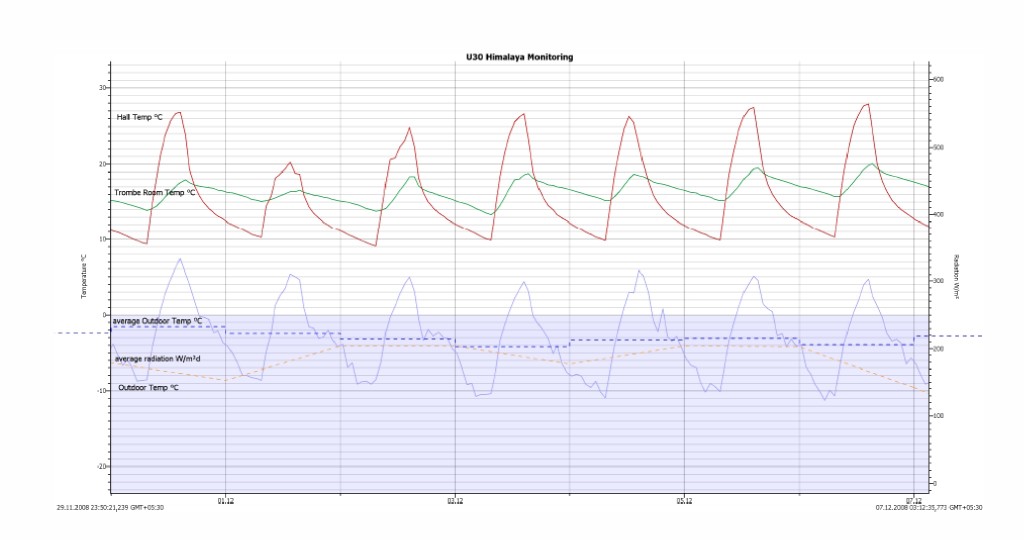