The aim of the Himalaya project is designing and realizing step-by-step a hospital ward in the North Indian village of Sani situated in the province of Zanskar. The village is located on a plateau up in the mountains, approximately 3700 m above sea level. The desert-like climatic constraints provided by this location place high demands on the building to be planned in terms of energy supply since in Winter temperatures may reach -30 degrees. The temperature amplitude between day and night is quite large since normally there are no clouds to make sure that the energy stored in the soil during the day is kept in the air layers near the soil at night. The absence of clouds has the advantage, however, that the sun is only covered seldomly, and owing to this continuous availability we can thus use it as a primary energy source.

The building is to be used all year round. During Winter lasting up to five months, the large room which is self-heating owing to the solar radiation, is to be used by the children from Sani and the surrounding areas as a winter classroom. Up to now, during this time there were no lessons held, these only began in the past two years in the newly glazed corridor of the old school with the help of cow dung fire. 70 and sometimes even more pupils regularly took part in the lessons sitting on the ground.

Over the entire year the house is to be used by the population of Zaskar for health care purposes. The rooms furnished with Trombe walls will store the solar heat captured during the day in order to be able to offer possibly hospitalized patients a warm room at night as well.

Regarding this hospital, particular emphasis is to be placed on vaccination protection for children which need to be protected against the newly introduced childhood diseases of the outside world such are polio, tetanus, measles, rubella, etc.

An operation unit is to enable minor operations as well as dental treatments. The large room is to be used as well to make the children familiar with daily dental hygiene. Here it is also possible to educate Amchis from isolated valleys so that they can pass on their knowledge to these places as well to the benefit of the children.

These high and challenging targets probably cannot be realized entirely during the first year. However, their realization is well underway thanks to the approvals of some other organizations (Médecins Sans Frontières Germany, dentists who were already on site and partner associations such as “Children of Himalaya” Germany).

Since the project is to be realized step by step (building is only possible during the Summer months), it is only possible to finish the ground floor in the first year, the upper floor will follow in the second year.

Another challenge presents the procurement of construction materials and technical equipment. The area is very isolated, on the one hand, and on the other hand situated above tree level so that wood becomes a very rare construction material. The main construction material is clay bricks which may be produced directly on site. Clay has a high density which has both advantages and disadvantages. The good storage capacity of the material which allows solar energy to be stored in the massive components and given off time-delayed (overnight), is very advantageous. The high density’s disadvantage is reflected in the poor heat insulation of the material. Owing to this, the heat-insulating walls have to be designed in the form of double-layer structures. Heat-insulating material (straw) has to be applied between two layers of clay (with a thickness of approximately 20 cm). 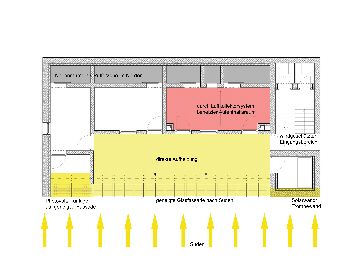 The above described climatic and usage-specific aspects impose some restrictions on design. Since the sun is the only energy supplier, the window faces of the building have to be oriented towards the south and the northern face needs to be closed off completely, if possible. This alignment or orientation corresponds with the orientation of a passive house and leads to a maximum of solar energy input. The second decisive prerequisite for low energy consumption is a possibly favourable relationship between heated room volume and heat-dissipating building hull, i.e. a favourable A/V relationship. These requirements are fulfilled by the design owing to a layout with a two-storey structure completely open towards the south.

The northern face is entirely closed with the exception of the entrance door. Furthermore, our design is based on the principle of a “thermal onion” by providing buffering spaces. The corridor, the toilet and warehouse rooms in the upper storey serve as buffering spaces for the entire living area (doctor’s room, sleeping room, treatment room and kitchen as well as winter school on the upper storey). These buffering spaces do not pose any requirements on thermal comfort since they do not function as common rooms but only serve subordinated purposes. Thus cooling of the building towards the north is prevented.

The sleeping room poses the highest requirements regarding thermal comfort since the patients are to sleep there. Owing to this, this room is enclosed on three sides (east, west and north) by rooms which reduce cooling. Towards the south, the room has been furnished with a so-called Trombe wall.

The kitchen plays an important role for the principle of “onion peels”. It serves as another northern buffering space for the sleeping room. If in use, there even develops heat there owing to the hearth or oven. If it is not used, it still retains its function as a buffering space, however.

The treatment room and the large room on the upper storey are completely glazed towards the south. In doing this the principle offered by a greenhouse is made use of, since the sun may heat up these rooms relatively quickly in the morning. Owing to the huge glass surfaces, these rooms cool relatively quickly if the sun does not shine anymore.